I had this vision of creating a model maple tree that my preschoolers could tap and pretend to collect sap. I wanted the kids to have some first hand experience before we took them to a local sugar shack.

So I found the largest piece of cardboard I had, and got to work crafting a maple tree. Then I recruited my then five year old to help me practice collecting the sap. He was a bit dismayed at how slow the drips were, but once a puddle of ‘sap’ collected in the bowl he became excited about the process. As with many of our projects and experiments, I lost interest long before him. He continued to collect the sap for almost an hour and only stopped because his little sister started dumping the sap bucket! 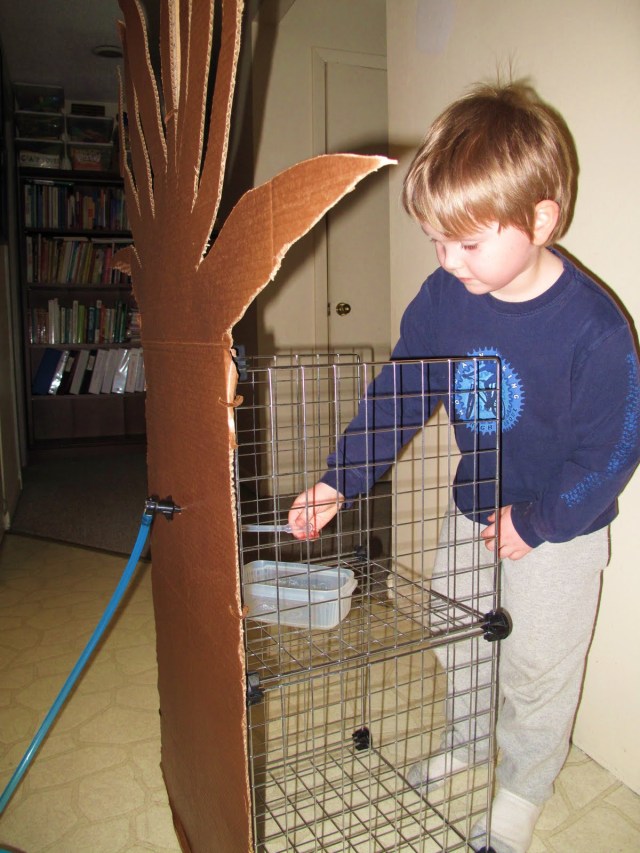 How it works:
One child gets to stand in the back of the tree and starts the flow of sap by using a pipette or turkey baster to push water into the tap.
The other kids watch as the sap drips from the tap, runs through the plastic tubing, and finally collects into the bucket.
To keep a group of kids interested in the activity, be sure to have plenty of funnels, cups, spoons, strainers, and tubing for them to explore properties of ‘sap’.

When I led this activity in my preschool classroom the kids were eager to be the one behind the tree and a line formed as they waited their turn. So I put additional pipettes in the collection bucket and they played there until it was their turn to ‘be the tree’.

This activity would be great to try at home. You could use any type of hose and a turkey baster! If you don’t have cardboard to make a tree, you could use a grocery bag with a hole cut or a large oatmeal container.

Check out my Pinterest board for more Maple Sugaring Ideas!
https://www.pinterest.com/azajko/maple-sugaring-with-children/